On this page, media representatives can view and download our latest press releases and selected photos of the Sudeten German Museum. Please address any enquiries to our press officer. 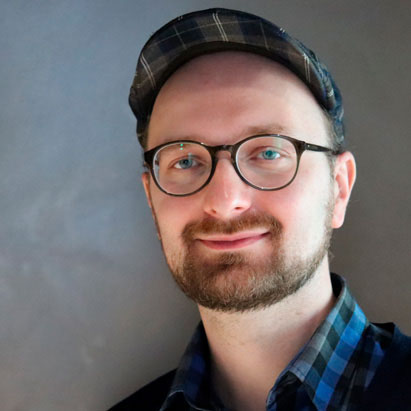 The first temporary exhibition of the Sudeten German Museum in Munich presents Werner Reinisch – an artist whom many visitors may encounter for the first time. To mark his 90th birthday last year, the museum is showing the latest works of the artist, who lives in the South of France. The Sudeten German Museum opened in 2020. It was forced to postpone the exhibition until now owing to coronavirus.

After being expelled from his native northern Bohemia, Werner Reinisch (born 1930) found a new homeland in France at the beginning of the 1960s.
While the title of the exhibition, “From Bohemia to the Ardèche”, refers to his life story, it also reflects the similar fates of numerous Sudeten Germans of his generation. To this day, Werner Reinisch’s work remains imbued and alive with the memory of his early homeland. As he himself has repeatedly remarked, the Sudetenland continues to be an object of eternal longing, even in his new homeland in the French Ardèche.

It was in France in the mid-1960s that Werner Reinisch first exhibited his work in public. Of crucial importance was his encounter with European modernism, especially the early expressionist style of the artists’ group “Die Brücke” but also the surrealist method of automatism.  That encounter led to a spontaneous, figurative style of expressionism that he developed in the southern light of the Ardèche department – away from the bustling art scene and parallel to the emergence of the European movement of the “New Fauves” – during the period up to the early 1980s. Through the development of this style, Reinisch stepped out of the canon of classical modernism and into an artistic contemporaneity that has lost none of its freshness today.

With around 40 paintings and graphics, the exhibition focuses on Werner Reinisch’s latest works, dating from the past three years. Executed on black canvases, the paintings demonstrate a clear consolidation of painterly means towards a more graphic signature. The ever-recurring motifs of the cross, horses, angels and birds remain constants of his individual iconography.

Reinisch’s love of horses and riding also stems from his Bohemian homeland and persists to this day. The motif of the horse appears throughout his entire oeuvre. The horse paintings included in this exhibition trace Reinisch’s artistic development from a compressed, expressive style of painting to one that is more open and has confidence in the power of the line.

Just how important drawing – the most direct form of visual art – is for Reinisch’s imaginative pictorial world can be seen from the selection of his extensive graphic work (etchings, drawings, lithographs) and jewellery designs from the very start of his artistic career in France – as a street artist in Paris.

Günther Moschig is the curator of the exhibition.

“Nothing more and nothing less than the experience called homeland”

Visitors to the Sudeten German Museum in Munich – the first national-level museum of the Sudeten Germans – are greeted by this quote from former Czech President Václav Havel. Under the main theme of homeland, the permanent exhibition describes what the homeland in

Bohemia, Moravia and Sudeten Silesia was like, how it was lost following the expulsions from 1945 onwards and how the Sudeten Germans sought a new homeland, which many of them found in Bavaria. The museum spans more than 1,000 years of history presented by some 900 exhibits spread over 1,200 square metres of exhibition space. With its light-coloured sandstone façade, the extraordinary new museum building, designed by the architecture firm pmp architekten, makes a bold statement from a site high on the banks of the River Isar.

The permanent exhibition extends over five levels, through which the visitor descends from top to bottom following the sequence of themes. The top level, devoted to homeland and religious faith, introduces the Sudeten Germans and their diverse homeland regions, from Egerland in the west to the Beskids in the east. The most valuable object in this section is a cabinet with relief inlays that was made in Eger in the 17th century.
The economy and culture section of the exhibition shows the full range of Sudeten German economic production, from Kunert stockings and Thonet furniture to Pilsner beer. But the showstopper is the Böhmerland motorcycle, the longest production motorcycle in the world. To illustrate the theme of culture, visitors are invited to a replica of a Vienna-style coffee house.  The section that explores the theme of nationalism and nation state traces the historical developments that led to the loss of the homeland: burgeoning nationalism, the end of the Habsburg monarchy, the founding of the Czechoslovak Republic, the “Anschluss” to the National Socialist state and World War II. Loss and expulsion is the theme of the next section, which focuses on the catastrophe caused by the expulsions. An installation vividly portrays the collapse of the old, familiar way of life. In video interviews, contemporary witnesses speak about what they experienced. How the Sudeten Germans built a new existence for themselves is described in the section of the exhibition devoted to the post-war period and a new beginning: from life in emergency accommodation through the construction of new settlements and the founding of firms to the experience of the culture of remembering. The last theme is that of reacquaintance with the old homeland and rapprochement between Germans and Czechs. The final set piece invites the visitor to join the “Brno reconciliation march” – an annual event that combines remembrance and cross-border encounters.

A barrier-free design hallmarked by clarity and variety provides the setting for the permanent exhibition of the Sudeten German Museum. The mediation of content is supported by modern media technology in the form of audio and video stations as well as touch screens. There are also two large databases: one provides information about some 20,000 towns and villages in the Bohemian lands and the other details the homeland collections of the post-war period

We are happy to provide photographs of the Sudeten German Museum for both press and exclusively private purposes. Please note the following terms of use:

The photographs are available for illustration of print and online publications and for exclusively private use only. Any commercial use going beyond that and using the photograph as the basis of commercial purposes shall not be permitted. Especially the use of any of these photographs in image databases and archives as well as the provision of images for download or purchase shall be prohibited.

The use of the photographs made available here for the above-mentioned purposes is free of charge. Unless otherwise stated, “Sudetendeutsches Museum” is to be quoted as the photograph source when an image is used.

It shall only be allowed to mechanically or digitally edit or alter the photographs provided if such editing or altering does not result in any distortion, falsification or contortion of the images.

The photographs must not be used for any illegal or unethical purposes or depictions – especially, it shall be prohibited to use them in any sexist, pornographic, racist, youth-endangering or discriminating context or for the purpose of glorifying violence or inciting to ethnic or racial hatred. The Sudeten German Museum shall not be held liable in any way for any claims whatsoever resulting from the illegal use of the photographs provided.