The Sudeten German Museum is the central museum of the German-speaking population in the Bohemian lands. The permanent exhibition spans more than 1,100 years of the history of the region, its art and its culture. That history is related by authentic objects from the museum collections exhibited in a space measuring 1,200 square metres.
more

Under the overall concept of “homeland”, the Sudeten German Museum focuses on the life of the Germans in Bohemia, Moravia and Sudeten Silesia – what is today’s Czech Republic. The exhibition begins with the section on “Homeland!”, which describes the landscape and its inhabitants in the cultural, religious and economic context before 1945. Under the heading “The End of the Accepted Order”, it examines the political and social developments of the 19th century up to the catastrophe of World War II and the expulsions in the 20th century. “Homeland?” – now with a question mark – depicts the difficult new beginning and the integration of the Sudeten Germans in the West.

For centuries, the homeland of the Sudeten Germans in Bohemia, Moravia and Sudeten Silesia was shaped by the coexistence of three peoples – the Germans, the Czechs and the Jews. The Sudeten German Museum takes a look at this common homeland in all its facets, from which emerges the picture of a model cultural landscape of pan-European significance.

The Sudeten German Museum presents established facts in a lively and easy-to-understand way. Owing to its modern design, which incorporates the use of media, and its architecturally outstanding building, the museum leaves its mark far beyond the Bavarian state capital of Munich.

Nominated for the European Museum of the Year Award 2023 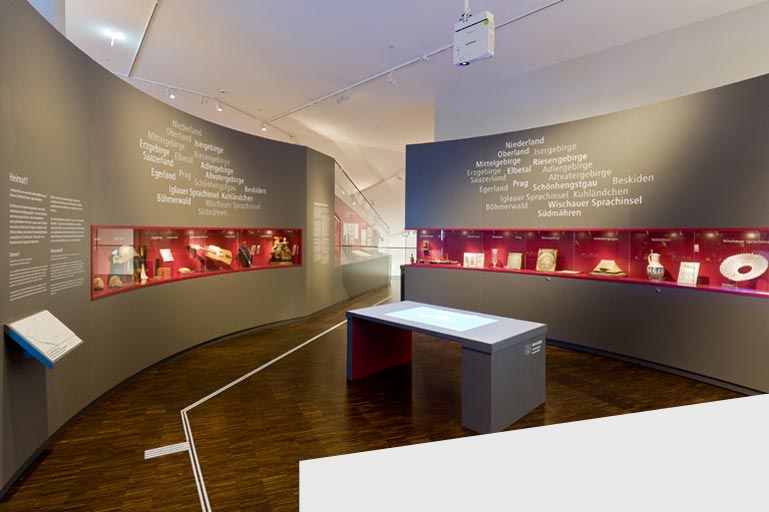 Learn about the life of the Sudeten Germans from our fascinating exhibits and modern multimedia stations. Further information 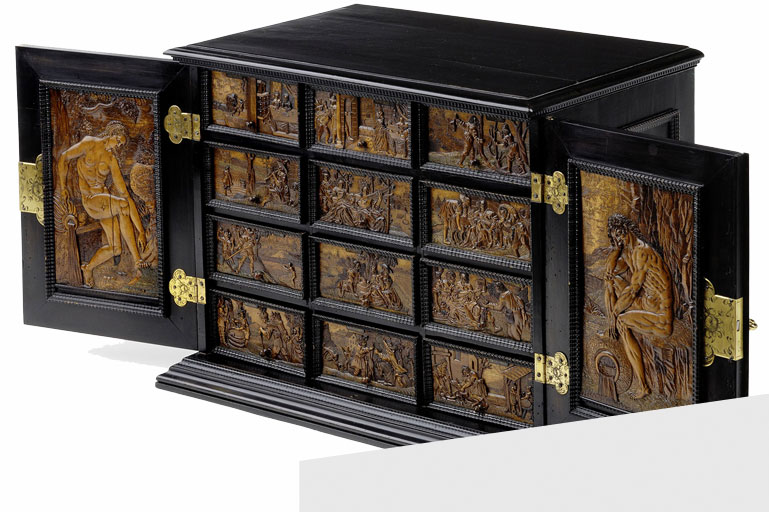 Temporary exhibitions are regularly held at the Alfred Kubin Gallery of the Sudeten German House (click here for details). 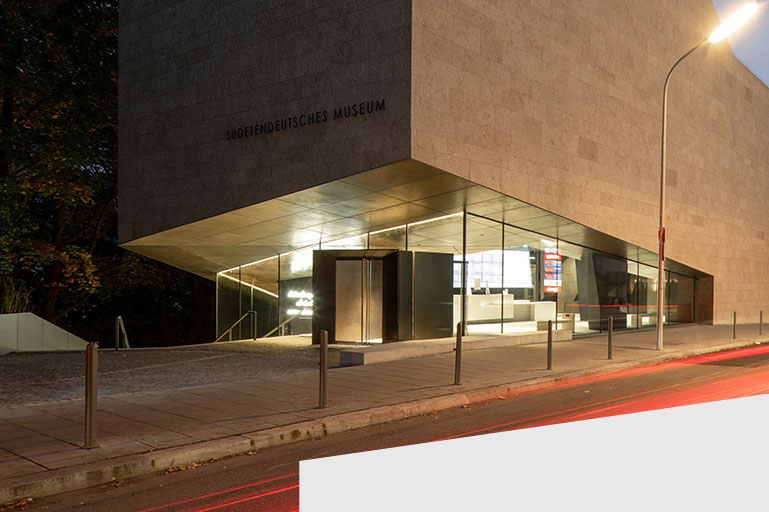 Sudeten German Dialogues: Ethnic Minorities and Ethnic Groups in Europe in Dialogue:         2th to 3rd of December 2022
Other events 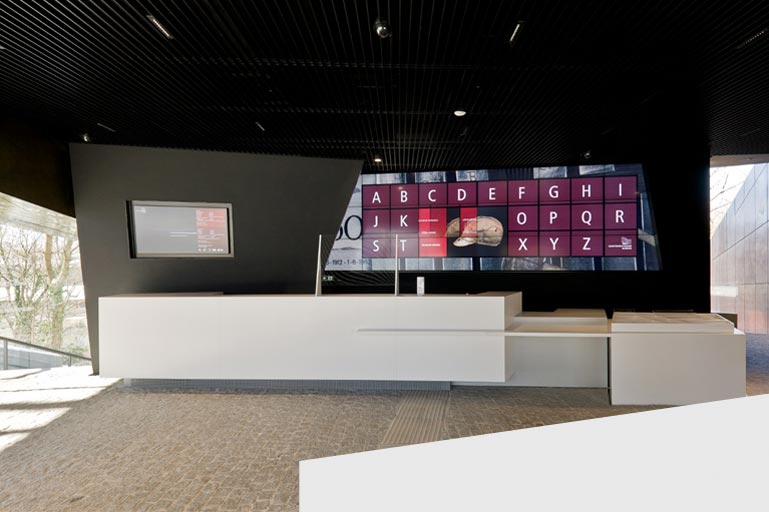 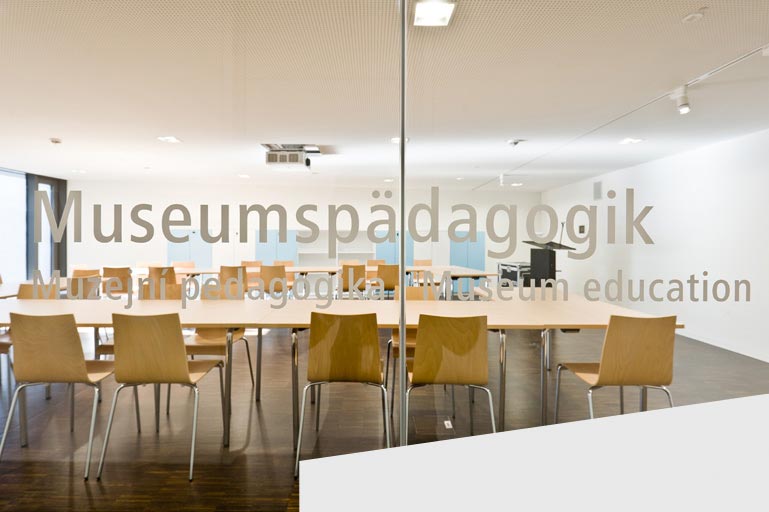 Exciting themes and programmes for school groups of all ages. Find out more! 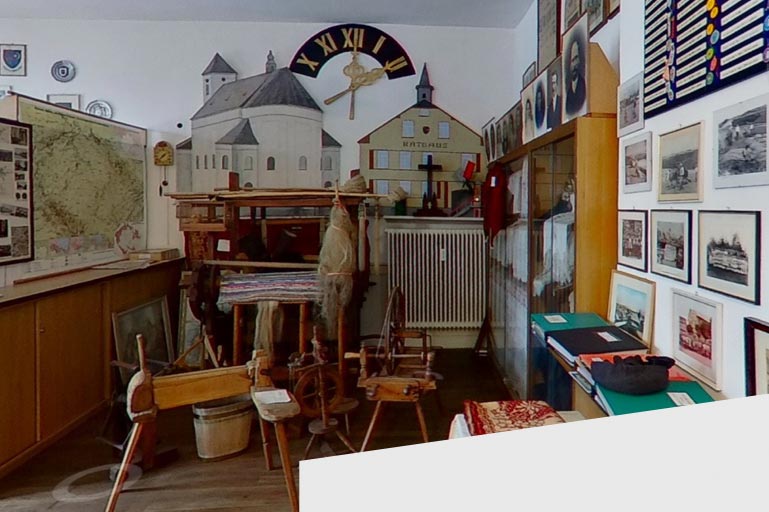 From the comfort of your home, visit selected homeland centres in digital and three-dimensional technology.

By underground:
all S-Bahn trains on the main line to Rosenheimer Platz, exit Gasteig/Muffathalle/Hochstraße

The museum is fully accessible. There are tactile floor markings as well as audio and touch-screen terminals. The museum texts are available both in audio and in German sign language.

The multimedia guide is available from the reception.

Small dogs and guide dogs are allowed in the museum in dog carts.

You can currently enjoy your visit to the Sudeten German Museum without any Covid-related restrictions. However, we recommend wearing an FFP2 mask.

Exhibit of
the month

A dancing porcelain couple at a workshop with the museum educator.
Bring museum objects to dance on 21 February!

On display in the permanent exhibition on level 2